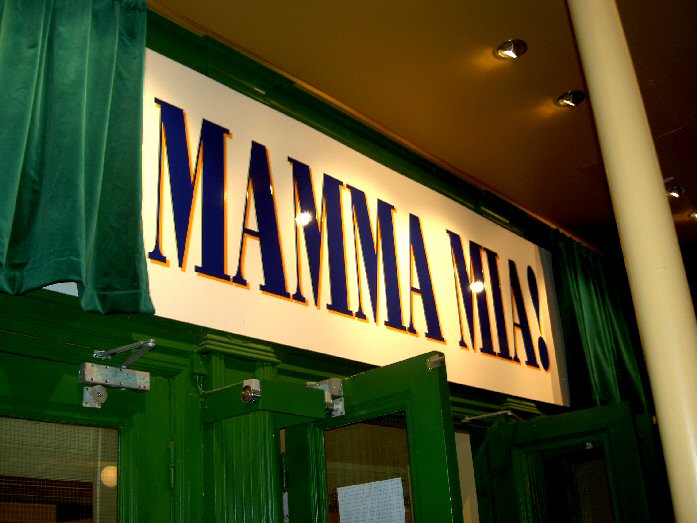 Mamma Mia all over the world

The premiere of Mamma Mia at Cirkus, Stockholm

The premiere on February 12, 2005 was attended by all four former members of ABBA. They were sitting far from each other and it was impossible to catch the foursome for any photo together.

The CD with studio recording of the Swedish version of "Mamma Mia" contains 24 songs. Niklas Strömstedt produced the album.

Mamma Mia in the world

The original cast recording was released on CD in 1999. The album entered the UK chart on November 13th, 1999 where it stayed for 2 weeks peaking at #56.

The locations in London

"Mamma Mia" had its premiere at the Prince Edward Theatre - the same theatre where B & B's musical "Chess" was played between 1986 and 1989.

The fifth anniversary of Mamma Mia in London (2004)

Björn and Benny were in Toronto preparing the set-up of the musical there. The premiere of the show in Toronto was attended even by Frida.

On October 18th, 2001 "Mamma Mia" opened at the Winter Garden Theatre on Broadway in New York.

Both Björn and Benny attended the premiere.

On November 3, 2002 Mamma Mia had its premiere in German language at Operettenhaus in Hamburg. It was the very first translation of the musical from English into another language. According to the press ABBA songs work in German as well and it seemed to be a little special feeling as the songs had been written especially for the German show.

The three biggest German stars of the musical are: Carolin Fortenbacher, playing mother, Katja Berg, daughter and Kerstin-Marie Mäkelburg, playing a good friend to mother. It was a real fun to hear "Thank You For The Music" in German language called "Danke für die Lieder".

Preparations and the premiere

The Hamburg version of the musical recorded live at Operettenhaus was released on CD in 2004.

This premiere of Mamma Mia in Stuttgart in Germany in July 2004 was attended by Björn and Anni-Frid.

The premiere of "Mamma Mia" in Essen took place on May 6th, 2007. Björn attended the first show.

The press premiere on October 20th, 2007. The gala premiere attended by Anni-Frid Reuss and Björn Ulvaeus on October 21st, 2007.

Mamma Mia in Utrecht which had its premiere on November 9th, 2003 closed on February 12th, 2006 and moved to Antwerpen (Belgium).

The Dutch CD release contains the live recording just like the German one.

One more premiere of "Mamma Mia" took place on February 14, 2003 in Las Vegas (USA). The most important thing for ABBA fans was of course attendance of Anni-Frid Reuss and Benny Andersson!

Björn & Anni-Frid attended the Irish premiere of "Mamma Mia" on September 9th, 2004 in Dublin. One more nice trip for the former members of ABBA. Björn and Frida appear on many ABBA related events together nowadays so maybe it's time for more? Why not a whole album written by Björn and sung by Frida? (Thanks Peter for the pictures).

Björn and Frida attended the premiere in Madrid on November 18th, 2004. The CD with the studio recording of the musical in Spanish was released in 2005.

Location: the "Sazka" Hall in Prague

The programme & the cast

Special limited edition "Mamma Mia - The selections" released in Prague as an attachment to the "Prague Daily" on Saturday October 13th, 2007 - probably one of the biggest Mamma Mia rarities.

The Norwegian premiere of "Mamma Mia" attended by Björn and Benny took place on 19 March 2009 at the Folketeatret in Oslo.

Björn and Benny were interviewed by NRK TV. The 30 minutes long interview was broadcasted under the premiere evening.

After the premiere - interview

The Danish translation of the ABBA songs was made by Anne Linnet who is proudly posing for the photos with Björn Ulvaeus. The team of Danish actors and singers are playing the main roles: Donna by Nicoline Siff Möller, Sofie by Kristine Yde Eriksen, Tanja by Nastja Arcel och Bibi by Pernille Schröder, Bill by Peter Oliver Hansen, Henrik by Lars Oluf Hansen and Stig by Morten Lützhöft. The manuscript was written by Ann Mariager and she said that there are several changes to the original version of the musical.

CD with live recording released on February 21st, 2011 in France.

The premiere of "Mamma Mia" in the Finnish capital Helsinki took place on September 27th, 2014. Björn attended the premiere.

"Mamma Mia" had its Czech premiere on December 12th, 2014 at the Congress Center in Prague. Officially is the Czech language the 15th "Mamma Mia" language.

The premiere on Feburary 21st, 2015 was attended by Björn & his wife Lena as well as Bengt Bauler from the Swedish set-up of the musical in Stockholm. "Mamma Mia" is played at the "Roma" theatre in Warsaw.

ABBA songs sound great with Polish lyrics. The CD was released on January 8th, 2016 and features 24 songs - this is a studio recording not live version from the show. Björn Ulvaeus who attended the premiere in Warsaw (see above) said that he was very proud of the Polish set-up of the show and particularly he liked fantastic voices of the Polish "Mamma Mia" cast.